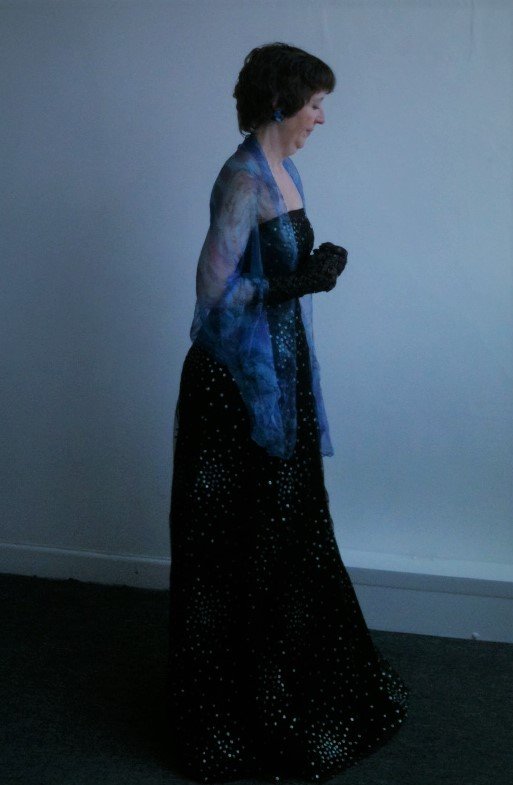 35 years of singing, dancing and creating across America, Paris, Brussels and the UK. Mary’s work with Theatre de La Jeune Lune and The Heart of the Beast Puppet Theatre in the USA whetted her appetite for devised theatre and she was off!

After her studies at Lecoq, Mary spent 12 years creating shows for a variety of producers in Brussels, finishing her time there with her one-woman show “Of Cakes, Men and Angels” which premiered at the Edinburgh Fringe Festival. When she moved to the UK in 2000, she started to create concerts that combine vocal improvisation, silence and singing. These collaborations with other singers resulted in “The River of Sound” (2006–2008) and since 2014, “Anam Cora”.

Mary has been invited to create pieces for: Cley19 Contemporary Art Festival (“Lines and Spaces”), Live Art Norwich, Scratch Nights at The Garage, Norwich Cathedral, “Fiercest Light” (BBC documentary), Pop My Mind Live Art, Sing with Pride Choir (A Coming-Out Micro Opera), Dove Street Open Studios, and The Festival of the Beats. She is also singing regularly with John Bencze as “Off the Cuff” and Anam Cora.

She is currently working on the follow-up to “Lines and Spaces” and continuing to develop “BRA-VO!” – a tragic-comic opera about the high cost of fast-fashion that fits in a D Cup. Find out more about Mary’s current art works.

Mary studied singing with Diane Coloton at Indiana University, then with Nancy Grauff in Minneapolis and Emmanuel Nicaise in Belgium.

She has taken Master Classes with the Roy Hart Theatre (Extended Range Work), and the Pan Theatre (Archetypal Voice and Choreographic Voice).

Mary has also studied the spiritual and healing/therapeutic aspects of the voice, including an in-depth training with Chloe Goodchild on the Naked Voice.

She has a B.A. in Theatre from Marquette University, and advanced training in movement/dance and improvisation at Indiana Universty, The Palace Theater, and l’Ecole du Mime Jacques Lecoq.

Mary keeps current with classes in song-creation with Helen Chadwick, as well as movement and authentic voice improvisation at the Dance Research Studio (Jacky Lansly), with Kath Burlinson (Authentic Artist Collective), plus an in-depth workshop about Devising Work with Bryonny Kimmings.

This website uses cookies to improve your experience while you navigate through the website. Out of these, the cookies that are categorized as necessary are stored on your browser as they are essential for the working of basic functionalities of the website. We also use third-party cookies that help us analyze and understand how you use this website. These cookies will be stored in your browser only with your consent. You also have the option to opt-out of these cookies. But opting out of some of these cookies may affect your browsing experience.
Necessary Always Enabled
Necessary cookies are absolutely essential for the website to function properly. This category only includes cookies that ensures basic functionalities and security features of the website. These cookies do not store any personal information.
Non-necessary
Any cookies that may not be particularly necessary for the website to function and is used specifically to collect user personal data via analytics, ads, other embedded contents are termed as non-necessary cookies. It is mandatory to procure user consent prior to running these cookies on your website.
SAVE & ACCEPT